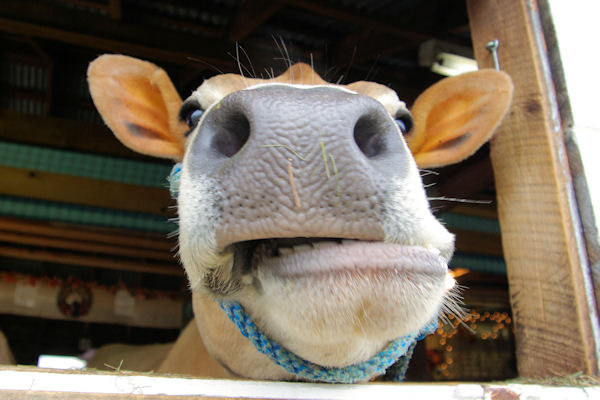 The very first Cumberland Fair (called the Cumberland Town Fair), was held for two days on October 7th, 1869 in the center of town in back of what is now Greely High School. Admission was ten cents.  The land was provided by Capt. Enos Blanchard. His house is now Cumberland Food Company on the corner of Tuttle Road and Main Street. The ladies of the town had an opportunity to show all who attended what marvelous cooks they were, and what fine needlework their fling fingers could provide. Farmers brought their biggest and best-tasting vegetables. Those men with working steers could show off the strength and coordination of their animals at the ox pulling contest. Local horsemen raced their finest steeds on Main Street from the junction of Tuttle Road and Blanchard Road to Greely Road. And so it began.

In 1874, the Cumberland Farmer’s Club moved the Fair to their newly purchased grounds in West Cumberland, which included a fenced-in trotting park of half a mile. There was discord and bitter feelings between the Cumberland Farmer’s Club and the Cumberland Centre Club. with both groups claiming to have more original members, and therefore they were the “true” Cumberland Fair. The two groups ran competing fairs for five years, though it appears the public did not record any ongoing competition between them. The Cumberland Centre Club gave up their event in 1878, and it is not clear what prompted that decision, though it may have been attributed to not owning much of the property that they used.

A group of prominent Cumberland citizens, including Eliphalet Greely (nephew of Eliphalet Greely, benefactor of Greely Institute, now Greely High School), petitioned the State of Maine to formally incorporate the Cumberland Farmer’s Club. The petition was enacted upon and approved in February of 1875.

In 1893, the very first Pig Scramble in the State of Maine was held at the Fair.  This tradition continues on Saturday morning, the last day of the Fair annually.

In 1912, a two-story Exhibition Hall was built on the grounds.  Tragically, fire destroyed the Hall in 1917. World events played an impact on how life was operated – even the Fair. Due to the involvement of World War 1, and an outbreak of the Spanish flu, the Hall was not rebuilt until 1921.  That Exhibition Hall is now the 4H Exhibition Hall. These world events also prevented the holding of a Fair in 1920 and 1921.

In the 1930s, much building activity took place, including 1931 Poultry House, 1933 Cattle Shed, and in 1938 a new grandstand was built. The Farmer’s Club also purchased an additional 10 acres of land, the Peterson Property, for the sum of $800.  In 1941 it was voted that a clay track would be built. Clay is still the composition of the track today. In 1942 the first telephones (three of them!) were installed, and in 1945 the Fairgrounds obtained electricity. 1947 was the year that the grandstand at the outdoor pulling ring and the restaurant were built; in 1948 lights were installed around the track for night racing.

In 1952, the fair was officially renamed the “Cumberland County Fair”, and 1953 was the first year that the calf scramble was held.  In 1958, a new Horse Barn was added to the growing property.  The 1960s brought more development, first in 1960 the “new” Exhibition Hall was built and the old one was designated for 4H use. The Ed Wilkinson property was purchased in 1961, expanding the overall footprint, and that same year glass was installed in the Grandstands – one of few enclosed Grandstands in the entire state to this day.  In 1962,  new horse paddocks were built on the newly purchased Wilkinson property. 1967 brought the pulling department up to date with an entirely covered arena for the sport.  With the arrival of the 1970s, progress continued, adding race and draft horse barns from 1971 through 1974, and the Old MacDonald Farm building was completed in 1976.

Though the start of 1980 was marked by a  recession in the economy and high inflation,  the Cumberland Farmer’s Club somehow found the funding to build a new scale-house in 1981 as well as a new draft horse barn in 1985, while continuing to maintain the existing buildings and grounds overall.

The 1990’s brought more changes and improvements to the Fairgrounds and the Cumberland Farmer’s Club, with Pig Races being established in 1990, with CFC donating the piglets to be raised and trained by 4H members (a tradition that continues today). In 1993, the first Maine Agricultural Day was held, with events designed for grades K-6 including a scavenger hunt through the Fairgrounds! In 1994, Rebecca Maloney was elected as the very first Woman to become a member of the Cumberland Farmers Club. In 1995, the Blacksmith Shop was donated and installed, which quickly presented a need for a Fair & Farm Museum to be built in 1996.  In 1999, the Horticulture Building was built along side the Old MacDonalds Barn.

As the century turned to 2000’s, the Sugar House was built in 2001, and both the Railroad and Farrier Building were donated that same year, continuing to make the “Museum Area” all the more authentic and impressive in the Cumberland Farmers Clubs stated mission to preserve and promote agriculture and agricultural history and education in the State of Maine.  In 2008, 11 acres were purchased behind the existing race horse barns, creating a buffer between the Fairgrounds and the fast growing neighborhoods of Bruce Hill Rd. The miniature horse barn was added in 2009, after several years of exhibiting under a rented tent.

The 2010’s were a time of maintenance and restoration of the grounds and buildings, with the only “new” building being the Pulling Office addition in 2016. In December of 2013, after a long filing process, the Cumberland Farmer’s Club became an official 501C-3 non-profit exempt organization.

2020 brought the postponement of the Cumberland Fair due to COVID-19 pandemic, but also brought the donation and installation of the historic Harmon Sawmill.  The Cumberland Farmer’s Club held their first official fundraising effort through gofundme.com to try to bring in the funding needed to install the Sawmill and build an observation building to be able to run the Sawmill for public viewing during future fairs.  In 2021, the first major repaving project around the Exhibition Hall and Pulling Arena, (including the “food court”) was completed. 2022 brought the 150th Fair to Cumberland, and the Farmer’s Club celebrated with a two-day “Old Fashioned Fair” event in June as a pre-cursor to the actual 150th Fair,  held September 25 through October 1, 2022. The 2022 Fair was considered a great success, with excellent reviews from the public and the highest recorded attendance to date.

This entry was posted in About the Fair. Bookmark the permalink.